Unlike other farming games, Stardew Valley has a more interesting approach. You’re not bound to just build wealth, expand your farm, and sell goods. But you also get to make decisions that actually affect your game’s future.

Just as the decision you’ve got to make when you finally reach level 5 and have to choose between the professions to pursue ahead, a Rancher or Tiller? This is where things become tough since the decision you’ll make will turn around your entire playing style.

But you need not worry. Because this guide has all the benefits explained of each profession to help you out with making the most suitable decision.

Perks of being a Tiller 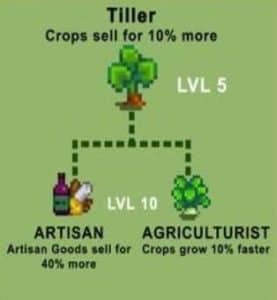 If you’ve got some obsession with the greenery in there, then Tiller should be your preference. Mostly, players opt for this profession regardless of what they’re interested in. And there’s a reason for it.

But for those who aren’t quite at level 10, that’s more than plenty. Things get interesting when you reach level 10, where you must choose between being an Artisan and an Agriculturist.

Pick the Artisan if you’re more drawn towards having a lot of animals and producing goods through them. And if you go for it, you’ll be more than glad, since it’s the most profitable profession of all. Because choosing the Artisan increases the profit on all your Artisan goods by 40%. This huge benefit is what draws the attention of farmers towards the Tiller profession.

Artisan goods are typically made using Artisan equipment. These include wine, truffle oil, cheese, mayonnaise, and more. However, some items like oil being listed as an Artisan good still don’t benefit from this profit when sold.

If you enjoy growing crops, the Agriculturist profession is for you. This benefits you with growing your crops at a 10% faster rate. This means you’ll be able to harvest and sell crops much faster.

When combined with the benefit of the Tiller profession, this one works perfectly. Because growing crops at a 10% faster rate allow you to sell them at a 10% higher profit.

So now, we don’t think that you’d be baffled with this follow-up choice between an Artisan or Agriculturist. Because the benefits that we’ve seen clearly affirms that the Artisan profession yields much more profit than Agriculturist.

Still, if you’re choosing Agriculturist with your interest, then its value with the added benefit of Tiller profession isn’t a poor deal.

Perks of being a Rancher 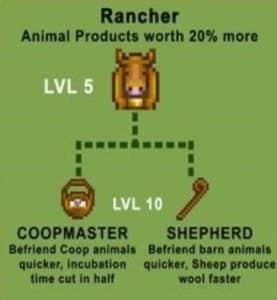 We’re sure you aren’t finding this as good as the Tiller profession. But it isn’t over yet. At level 10, you’ll have to make another choice with Rancher profession between being a Coopmaster or Shepherd.

Now, the benefits these professions offer are almost similar, but the choice totally depends on the kind of animals you raise at your farm.

If you prefer Coop animals, then the Coopmaster is the way to go. Being a Coopmaster means being a friend with the coop animals like Ducks, Chickens, Rabbits, and others. Through this profession, you get more hearts when you pet your coop animals. While the incubation time is also cut in half and the eggs hatch faster than usual.

If you’re raising barn animals like Sheep, Goats, Cows, and more, then Shepherd fits your play style. Shepherd makes you friend with the barn animals and increases the production of wool by the sheep.

Both the sub-choices, Coopmaster and Shepherd bring the same benefits to the table. So just go with the one that’s suitable for the animals you’re keeping at your farm.

How to Change Profession in Stardew Valley?

How I Catch a CATFISH in Stardew Valley

Which Profession Should you Go for?

With all of the information in hand, the answer appears to be simple. Although Artisan appears to be more advantageous, Rancher isn’t worthless. So you should go for the play style you want in the future.

If the wealth of gold doesn’t excite you, and you’d rather raise and befriend animals, then the Rancher is the perfect choice for you. However, if you want to make the most of your farm by growing crops or producing Artisan goods and selling them for a good profit, then Artisan is only a tap away.