Coming up with an attractive username in Call of Duty Mobile is a pretty difficult thing to do for some people.

That’s why we made this COD Name Generator tool to help you generate a stylish call of duty name with symbols.

Let’s go ahead and check it out!

It’s easy to use the COD Name Generator. The tool’s design is simple and quick to use. There are only a few steps between you and your stylish username.

How to use Call of Duty Name Generator

When you need a username quickly generated with random symbols, the ideal option is the Call of Duty name generator. All you need is a basic name to be styled. To use the COD Name Generator, follow the instructions below:

Here are some Funny COD Names:

Here are some Best Names for COD:

Here are some Cool Names for COD:

Here are some OG COD Names:

Here are some Sweaty COD Names:

Here are some Best COD Names for Boys:

Here are some Best COD Names for Girls:

How to Change Name in COD Mobile

I hope the Call of Duty Name generator proved to be helpful for you. Now, let’s set it up and slay some enemies. Most players don’t know fact that they can change their username. And if they know, they don’t know how to. 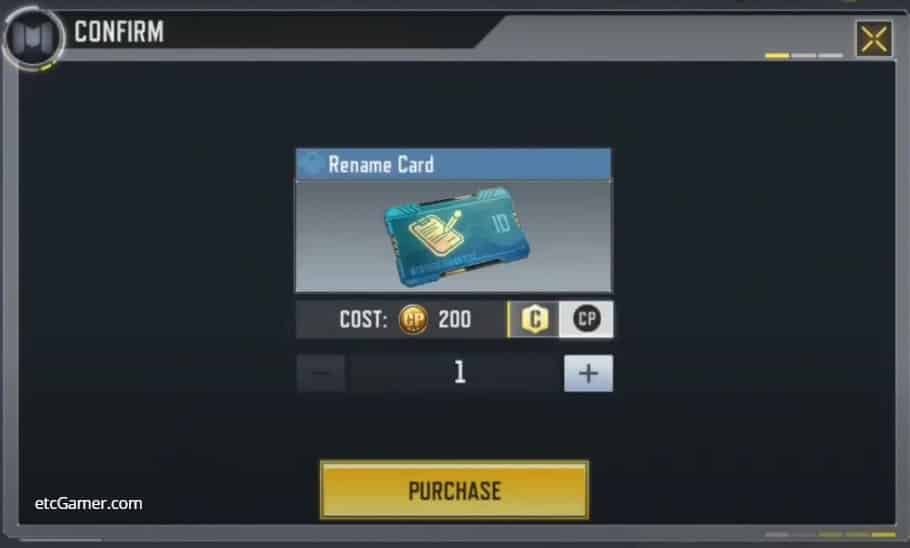 Call of Duty Mobile’s in-game store has a separate section for cards, that’s where you’ll find a rename card. You’ll need 200 CP or 1000 Credits to purchase a rename card. Call of Duty Points (CP) is only available for purchase with real money. We recommend purchasing with the Credits that are easy to gain.

After you purchase a rename card, follow the steps below to change your username:

It is important to keep in mind that players are only allowed to change their usernames once in three days.

Alternatively, you can watch this video for better understanding the procedure

Call of Duty mobile (CODM) is one of the biggest competitors in the battle royale genre. With its pleasing gameplay and graphics, it is attracting more and more players every day. The game has more than a hundred million downloads on the Google Play Store, and this huge number reveals the importance it has gained in no time.

Other than the game’s concept, one of the main reasons for its popularity is the game’s catchy interface. The game developers have enabled the players to do anything they want. Whether it’s changing the in-game settings, character and its appearance, or people you want to interact with, the game doesn’t limit the players’ choices.

If you have just joined the game, and you’re setting up your character profile, there is a high chance that you may make a mistake and regret it later too. You might be wondering why would you regret a mistake in a game. But, I’m warning you, this highly addictive game will make you regret it if you don’t do it right. What’s that? That’s choosing a username or IGN (in-game username).

Since its release in October 2019, Call of Duty Mobile has managed to acquire an enormous fan base. This is because of the game’s concept. The game allows its players a choice to play multiplayer and battle royale games, both in one download. And that has made the game more fun to play.

Other than that, the game’s graphics are something everybody has fallen for. Those realistic visuals provide the same experience as PC games on a mobile phone. How could someone ignore a game with all these features and smooth gameplay?

You can play as much as you want: the old freemium energy meters are gone, and you won’t have to face any annoying ads in between battles or anything. In this regard, the game is unexpectedly welcoming. If you like, you can play for hours without paying.

So, with no further go, you should definitely head towards the Play Store and download the game. But, while the game is being downloaded, why not just take some time and think about a compelling username for your character?

Besides your gaming skills, and equipment, your username is what matters the most. Your username leaves your first impression on the enemies when you face them on the battlefield.

Here we are, to help you terrify the enemies with a stylish, and unique name for your character. COD name generator will generate the best username for you. All you need is a name on your mind and leave the rest on this tool. So, go and check it out.

What is Call of Duty Mobile?

Call of Duty: Mobile is a free-to-play shooter video game for Android and iOS developed by TiMi Studios and published by Activision. The game, which was released on October 1, 2019, was one of the most successful mobile game launches in history, producing over US$480 million in revenue and 270 million downloads in less than a year.

The game has gathered over a hundred million downloads on the Play Store till today. The game offers two modes, battle royale and multiplayer and that’s what it is famous for.

What is Call of Duty Name Generator?

Most people like their usernames to look different. The COD Name Generator is a tool by the etcGamer.com which generates a stylish and unique name for you and that too free of cost. The tool’s design is quite simple and convenient that everybody can use it easily.

It requires you to have a simple name or word in your mind, and that’s all. There are two versions of this generator. The first version generates the username automatically. While the second version lets you add the special symbols from a large variety of stylish symbols. Once you have an ideal username generated, you can simply copy and paste the username into the game.

Can I change my name without a Rename card?

If you don’t have enough CP or Credits in your pocket, there is a trick for you. First, you need to have a Facebook account so you can save your game progress.

Follow the steps listed below to change your username for free and continue playing.

Why do Players Prefer Stylish Names?

In such games, where there is competition, players try their best to not only improve their gaming skills but also their character’s appearance, the gun that they own, their teammates, and most importantly their username.

Some players go with a straightforward name that defines them the best. While others try to have a unique username that helps them differentiate from others and leave an impact on the enemies.

Also, a huge number of gaming streamers have a stylish name and that’s how the trend began. Therefore, we have designed a  COD name generator to help you make a stylish username of your own.